Martin Sparey discusses why it isn’t always the largest revenues that drive the most coverage in the cloud infrastructure space.

For years, it was a popular tale we told each other at every conference. “Businesses will move to the cloud”, “everyone is planning digital transformation”, “tech will change the way we do business”. Yet cloud-powered business isn’t just a popular topic for whitepapers anymore. It’s here. And it’s been here for the best part of a year now.

2020 saw AWS continue to dominate the cloud market. Gartner said it occupied nearly half of the reported infrastructure-as-a-service revenues in its latest report (equating to nearly $20bn, sure). That market dominance was reflected in its UK earned media share of voice, too, as the below indicates: 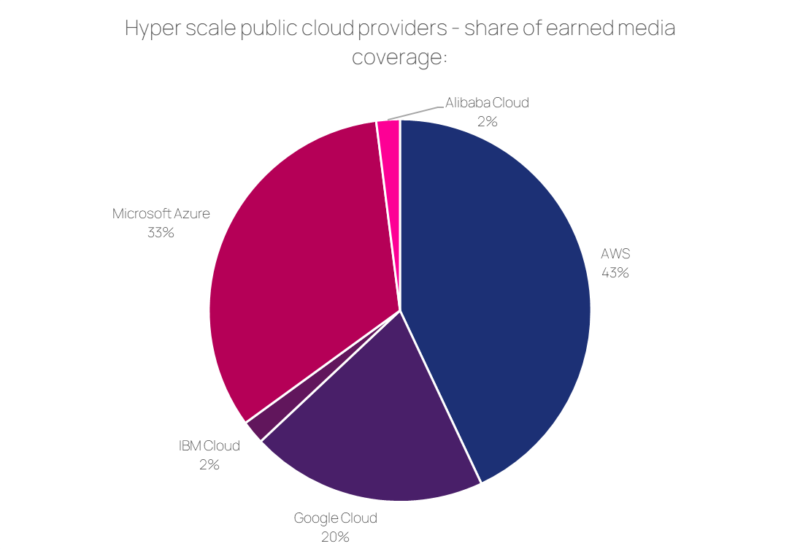 While AWS is the clear market and media leader, this pie chart indicates market-share alone isn’t a guaranteed driver of media traction. While Gartner reports Google Cloud to occupy just 5.3% of the infrastructure-as-a-service revenues, it is mentioned in a fifth (20%) of all cloud coverage. Conversely, Alibaba’s sales represent nearly a tenth of the market and the brand occupies just 2% of competitive media coverage.

While readers of such stories will want to know what’s coming up from a technological perspective, there is clearly still a keenness to learn from industry peers and household names as to how such technology is being deployed now from a use-case perspective – and what impact it’s delivering for an organisation.

COVID-19 has brought the world’s digital transformation forwards even faster than we ever imagined. And with sprawling, evolving, global cloud marketplaces and partner ecosystems, we’re already seeing a glimpse of ‘what comes next’.

But what does come next? (If I really knew, I probably wouldn’t be writing this blog post right now, but let’s put that to one side for just a second.) We can certainly anticipate more cloud investment, resulting in the likes of new cloud-first business models; democratised access to a game-changing new wave of horizontal technologies like ML and AI; faster routes to world-bending innovations we couldn’t have even dreamed of 20 years ago; new skillsets, new attitudes and new ways of working.

We’re going to see more multi- and hybrid-cloud deployments – with enterprises seeking to avoid ‘vendor lock-in’ or reduce the alleged security risks of being reliant on one cloud provider – and press covering the resulting customer use-case stories.

While AWS will still dominate the category, Google Cloud will continue to push its customers to tell its story, further building its credibility in the enterprise hyper-scale space. Alibaba Cloud grew cloud infrastructure sales by 62% in 2019, according to Gartner. Will we see its share of media coverage grow alongside that progress this year? How will Microsoft respond? Where does IBM see itself in this ecosystem?

It’s going to be a compelling race (and that’s before we even consider possible regulatory action affecting Big Tech). Breaking established moulds obviously isn’t a simple task – so rivals looking to close the gap on AWS will need to understand where their true place is in the market, what problems they uniquely solve for customers and how they can effectively differentiate themselves to stakeholders and the broader industry.

If you’re trying to break into a marketplace dominated by legacy players, or you’re seeing your market dominance being encroached by challengers, drop me a line.